"The Father" is one of the five nominations for Best International Picture of the Brazilian Cinema Academy Awards, the academy announced on November 1, 2021.

The film is in the exquisite company of Taika Waititi's "Jojo Rabbit", Robert Eggers' "The Lighthouse", Ken Loach's latest "Sorry We Missed You", and "Apocalypse Now: Final Cut" by the great Francis Ford Coppola.

The winner will be announced on November 28.

Paul Sheehan with the Gold Derby put THE FATHER among the leading contenders in the category along with the latest films of renowned filmmakers such as Agnieszka Holland, Naomi Kawase and Małgorzata Szumowska.

It is a great honour to be representing Bulgaria at the Oscars for the second time after our film GLORY in 2017.

The Bulgarian National Film Center (NFC) selected our latest project Black Money for White Nights to receive a production grant in the low-budget category (up to 300 000 euro budget), the NFC announced on June 25, 2020.

Black Money for White Nights is the tragicomic tale of an aging childless couple, who falls victim to a travel scam and loses all the money they've been saving for years from petty bribes to fulfill the long-cherished dream of traversing the Trans-Siberian Railway and see the white nights in St. Petersburg.

THE FATHER Bulgarian Premiere at the 24th Sofia Film Fest

The Bulgarian premiere of The Father will be held on March 15, 2020, at 8:30 p.m. at the Lumiere-Lidl movie theater as part of the 24th edition of the Sofia International Film Festival.

The will compete for Best Balkan Film as part of the Balkan Section of the festival. SIFF plays an important role in the making of the film since a work-in-progress version was screened at the Sofia Meetings co-production market in 2019. Click here for the official festival publication. 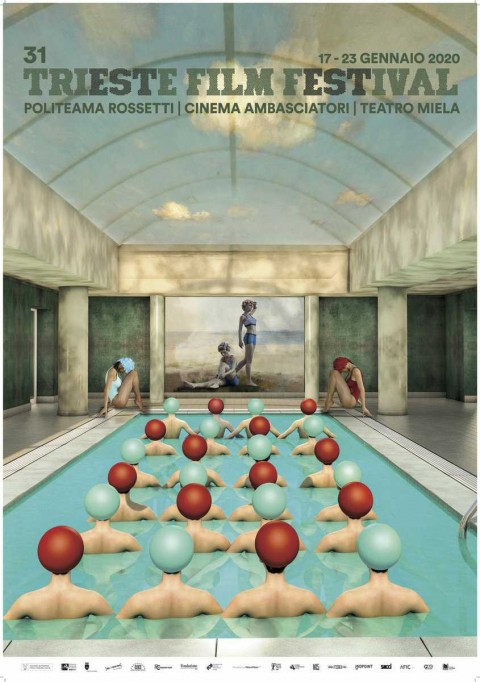 The Father won the Trieste Award for Best Feature Film at this year's edition of the Trieste Film Festival,  one of the most important events for Eastern European cinema.
The honor was even greater, given that the winner of the award is determined not by a jury, but by the audience. A huge thank you to the spectators in beautiful, windy Trieste.

THE FATHER collected the Youth Jury Award, Critics' Award and Golden Atlas for Best Film at the 20th anniversary edition of the Arras Film Festival in France.

Furthermore, Kristina Grozeva and Petar Valchanov's new project TRIUMPH won a 5,000 euro development grant, provided by the city of Arras. The project was pitched by Petar and co-writer Decho Taralezhkov to an international jury at the festival's industry platform Arras Days along with six other projects of filmmakers, whose films were part of this year's festival program. 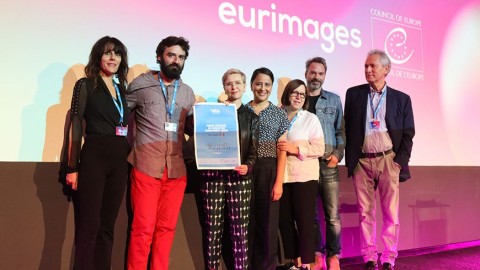 The award provides 20,000 euro in development funding. Presented at a public pitching session by Petar Valchanov and Decho Taralezhkov, the project was one of the 16 international titles in the feature film co-production market selection.

Jury members Fiorella Moretti, Ewa Puszczynska and Tobias Pausinger were "impressed by this highly original story with real contemporary relevance. The events which will be related seem hardly credible, but are absolutely true. Absurd but tragic, the finished film will certainly have a lot to say about some of contemporary society’s most evident failures."

The Father received three of the main awards, including Best Film, at the 37th Golden Rose Bulgarian Film Festival.

The film also won Best Screenplay and Best Actor in a Male Role, shared between Ivan Barnev and Ivan Savov. Ivan Barnev (seen in the picture, courtesy of Cineuropa) accepted the awards at the closing ceremony in Varna. The grand jury with chairman Milko Lazarov (BG) and members Renatta Santoro (IT), Hrvoje Hribar (CR), Joreta Nikolova (BG) and Emil Hristov (BG) awarded the prizes based on "original interpretation of the characters and convincing on-screen interaction" (male lead), "original dramaturgy and vivid characters" (screenplay) and "artistic maturity and achievement in the creation of an accomplished work of art" (best film). The winner of the main prize also receives the Danny Lerner award of 5 000 euro cash and 50 000 euro in services provided by Nu Boyana Film Studios.

THE FATHER won the Golden Owl, the award for Best Feature of the Tirana International Film Festival in Albania, during the closing ceremony on September 29, 2019. 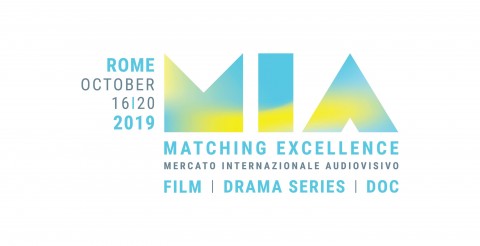 Our latest project TRIUMPH will be one of sixteen feature film projects to be presented at this year's Mercato Internazionale Audiovisio (MIA) in Rome, one of the leading international co-production markets.

The project will be publicly pitched by Petar Valchanov and co-writer Decho Taralezhkov at the event on October 17, 2019, and will compete for a 20 000 euro production subsidy provided by Eurimages.

Find out more about TRIUMPH.

THE FATHER Scores 2 Wins in Sakhalin

THE FATHER won the Best Directing and Audience Choice Awards at the ninth Sakhalin International Film Festival "On the Edge - East". Our co-writer and assistant director Decho Taralezhkov received the awards at the official ceremony on August 30, 2019, in the city of Yuzhno-Sakhalinsk.

Following festival selectioner Alexei Medvedev's introduction to "The Father" that "this is a film about me", many audience members came to share the very same impression and express sincere gratitude for the film to our overwhelmed delegate. Many admited that the film made them immediately call their parents.

This is for us a great recognition, especially in regard to the exceptionally strong competition program, which included Cannes and Berlin films such as Werner Herzog's latest "Family Romance, LLC" and this year's Un Certain Regard directing award winner "Beanpole" by young Russian director Kantemir Balagov, who collected the accolades for Best Film and Best Female Leads. Another Bulgarian connection in the official selection was Berlin-based director Simona Kostova, who competed with her debut Rotterdam and Berlin hit "Thirty".

THE FATHER will have its North American premiere at this year's Toronto International Film Festival, one of the leading film events in the world.

The film will be part of the Contemporary World Cinema section along with another Bulgarian title, Theodore Ushev's animated adaption of "The Physics of Sorrow" by Bulgarian writer Georgi Gospodinov.

Contemporary World Cinema focuses on foreign films often coming from Latin America and Eastern Europe. The program aims to transcend borders and provide a contemporary picture of the world outside of the North American continent.

"The Father" received the Crystal Globe for best film at the Karlovy Vary International Film Festival in a gala ceremony held on Saturday, July 6. 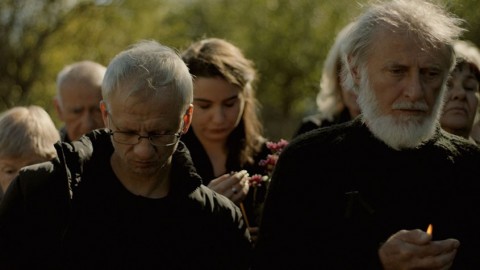 The third feature of Kristina Grozeva and Petar Valchanov, “The Father”, will have its world premiere on July 2, 2019 at the 54 th Karlovy Vary Intl. Film Festival, the leading movie event in Central and Eastern Europe. The directorial duo’s new intimate family drama will race against 11 titles in the festival’s geographically diverse main competition program. The film, co-produced by Greek production house Graal Films, stars Ivan Barnev and Ivan Savov in the main roles of an estranged son and father, who have to deal with the sudden passing of their mother and wife and her even more sudden attempt to phone the neighbour from the afterlife. en 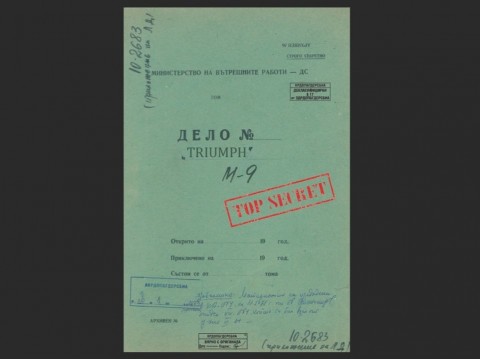 The latest project of Kristina Grozeva and Petar Valchanov, “Triumph”, received the production financing grant of the Bulgarian National Film Center (NFC), the NFC announced on May 31, 2019. “Triumph” will be the final installment in the directorial duo’s “Newspaper Clippings” trilogy after the internationally acclaimed and multiple award-winning “The Lesson” (2014) and “Glory” (2016). Developed together with “Glory” co-writer Decho Taralezhkov, the story will present a fictionalized account of the stranger-than-fiction events that occurred during a top-secret parapsychological experiment of the Bulgarian army in the tumultuous first two years of the country’s transition to democracy. The project was one of three to receive the low-budget production grant in the NFC’s first call for 2019. en